From the PR Department -

A Horse Named Steve is Published by Kids Can Press, Features Narration by Wilson, and is Written & Illustrated by Kelly Collier

Full-Length Book is Available Here To Watch & Read Along

Check out the Coverage in ET Canada 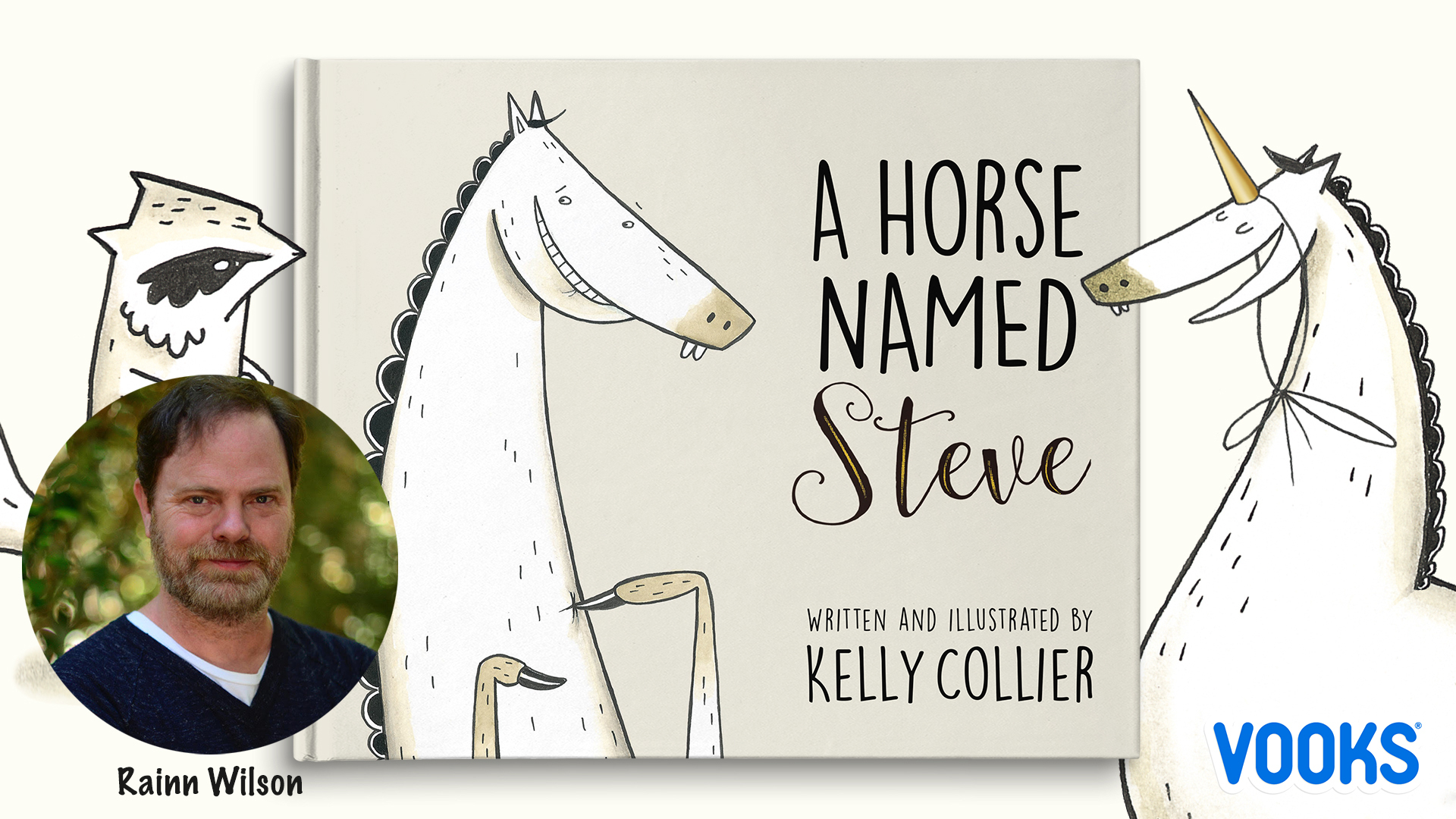 Vooks, the world’s first and only SVOD streaming platform bringing storybooks to life through animation, announced the premiere of the all-new animated storybook A Horse Named Steve, featuring the vocal talents of EMMY®-nominated actor Rainn Wilson. Published by Kids Can Press, and written and illustrated by Kelly Collier,A Horse Named Steve gallops into the Vooks librarytoday (Oct. 21) free of charge as a special treat for young readers around the world to enjoy.

A Horse Named Steve introduces young readers to the lovable stallion who hopes that a newly-discovered gold horn will be the key to making him exceptional. Wilson narrates the ecstatic equine’s journey as he prances through the forest, happily showing off his new trophy to all his friends. But, when Steve misplaces his precious prize, can he really still be exceptional? This charming tale features read-aloud text, engaginganimation, and a timeless message that teaches kids that anybody can be special.

The book’s sequel—Team Steve, also narrated by Wilson—is currently in production and slated to launch on Vooks inNovember, in time for the holiday season.

"How can you not love Steve the Horse?” Wilson said. “He’s fun, lovable, wears his emotions on his sleeve, and is utterly clueless in the best possible way. I had such a great time working on this, and I think Steve and his antics are going to be a big hit with Vooks readers!”

“Rainn Wilson is a blast to work with,” said Russell Hirtzel, Vooks Co-Founder and Director of A Horse Named Steve. “Putting this particular storybook together was really unique—we worked completely via video call to capture the performance, connecting our team in Portland, OR, with Rainn at his home studio near Los Angeles. Kids are going to flip over Steve the Horse. Undoubtedly, their parents already love Rainn—I mean, come on, he’s THE Assistant (to the) Regional Manager! Now, families everywhere get to laugh along together as they enjoy another of his unforgettable character performances.”

“I don’t think it’s possible that Vooks could have come up with a better actor to portray the endearingly clueless horse named Steve than Rainn Wilson,” said Steve creator, author-illustrator Kelly Collier. “He has somehow managed to bring to life the exact voice I heard as I wrote Steve’s dialogue. I’m thrilled that my books can also be enjoyed in such a fun, accessible way with Vooks’ animation and Rainn Wilson’s spot-on interpretation of Steve. It’s wonderful that the book’s message on the importance of being your ‘authentic self’ will reach a broader audience through Vooks.”

“Kids Can Press is proud to partner with innovative companies like Vooks and we are so impressed at how they’ve brought Kelly Collier’s imaginative tale to life in this wonderful new storybook,” said Kids Can Press President and Publisher, Lisa Lyons Johnston. “Steve is such a sweet and relatable character, making Rainn Wilson the perfect choice to portray him. He and the Vooks team have done an incredible job with this project, and we are excited to get to showcase Steve and his adventures to even more young readers around the world.”

The service is available worldwide and can be enjoyed on all popular devices including Apple’s iPad, iPhone, and Apple TV, as well as Android platforms and devices. Readers can enjoy unlimited access to the platform’s diverse content library for $4.99 per month or $49.99 a year. The platform also offers a free7-day, credit card free trial for those who would like to interact with Vooks before purchasing.

Vooks is the world’s first streaming platform bringing storybooks to life through animation. With an expansive library of titles, the Vooks storybook experience adds slight animation, sound and narration to classic and award-winning books that are loved by parents and educators alike. The kid-safe and ad-free streaming library of read-aloud animated storybooks transforms the reading experience by bringing words to life in order to spark every child's imagination. Vooks combines the love, trust and safety of children’s books with the convenience of online streaming, for a whole new way to experience stories. Founded in 2018, Vooks is headquartered in Portland, OR. To learn more about the Company and services, visitVooks.com and join the conversation onFacebook, Instagram,Twitter andPinterest.

About Kids Can Press

Kids Can Press, part of theCorus Entertainment family, is the largest Canadian-owned children’s publisher and the 2017 recipient of the distinguished Bologna Prize for the Best Children’s Publisher, North America. Their catalog includes an award-winning list of over 700 picture books, nonfiction and fiction titles for children and young adults that are translated and sold around the world. Kids Can Press has published books for children for more than 45 years and for over 20 years has seen a number of its properties developed for TV and film, including the Franklin the Turtle and Scaredy Squirrel series, the best-selling picture book The Most Magnificent Thing, which won 25 film festival awards, and CitizenKid: Earth Comes First, a documentary based on the CitizenKid collection of books on global issues.kidscanpress.com.